Moving Along, and the Problem With Heirs

Well, moving along. For several years I had my postings elsewhere and by now I'm satisfied that this is "home." I'd like to work toward cleaning up and closing down the old place but really didn't want to lose some of the writing, so I thought I'd move it over here bit by bit, on occasion.

That said, what follows is certainly apropos to this month, with St. Patrick's Day barreling down upon us. My family was quite a mixture and it made for interesting interpretations and events during childhood...

The Problem With Heirs

Aside from us children (a million cousins) who were all born here, my family was full of people who came, recently, from somewhere else. I was not confused about who we were; we were just us. But, at times, those adults in the leading generation could definitely do and say some interesting and confusing things.

On my father's side, we borrowed words from German and French to talk about things which, in polite conversation, are not normally mentioned. English euphemisms were not good enough; they had no feel, no real grip. It was difficult to wield them.

And so for example, our bottoms, when mentioned, were not bums, or tusches or rear ends (that one made eyes roll). No, our bottoms were popos or derrieres. Which was just fine; we knew which end was up.

Even though both were equally foreign, the two sides of my family were quite different. Mom's side drank beer, my father's side regularly drank wine. Their side sang regularly, my father couldn't carry a tune in a bucket.

It was singing, as it crossed paths with bottoms, that caused me the greatest confusion. Being Irish, Danny Boy was a great favorite with my mother's side and, being intent upon preserving culture, the adults NEVER failed to inform me that the name for the tune was "The Londonderry Aire," each and every time we sang it. And, each time I heard this, I would feel particularly appalled and look around surreptitiously at each adult to see how they were reacting. And, there was never any reaction, they just named the tune and then sang it.

I, however, always sat there totally mystified, trying to fathom the connection between old Danny and my family's earnest appreciation for London's claim to a song-worthy bottom.

And that, is the problem with heirs.

Posted by Victoria Cochran at 10:13 AM No comments: 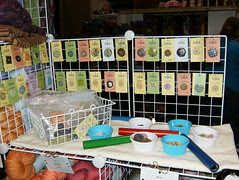 Quick post here! My buttons this last week/weekend at Stitches West, in Santa Clara, California. Sabrina, of Anzula, does the yarn and fibers...and hosted my buttons!

Busy week for me--I hope to have buttons up on Etsy by Friday, if not sooner. I've recently added three necklaces...more jewelry coming soon.

Posted by Victoria Cochran at 4:41 PM No comments: