A few months ago, at my Etsy shop, I was contacted by a seamstress. She had purchased a unique item, my single-hole Zinnia button, in black basaltic stoneware. She shared with me that she planned to make a Chanel inspired brooch and add it to a wool suit ensemble. The wool fabric she'd chosen was being handwoven by another artist.

I was very intrigued. After she'd received the button, I received a link to a picture of the button, along with the handwoven fabric. She also informed me that her plan was to enter the finished suit in this year's Make It With Wool competition. I had imagined the button as jewelry or as a button on a suit, but it had never occurred to me it might become something more. 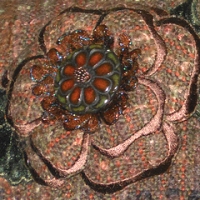 The suit is now well under way and this last week, I received a link to the picture of the completed brooch. I think my mouth fell open; it is just gorgeous. I've included two pictures here so you can see it on the suit (at left) but also get a close up view of her work (at right).

For those of you working in metal and paper, you might want to click on the first photo and then see the link she provides to the tutorial used as inspiration and guidance--her plan was very well thought out.


Design, details, construction...this is just superb work. I am in awe.

In my early twenties, I stayed up late one evening with a coworker who was also a close friend, at his parents', after a day of fishing. We both worked at a residential program, primarily with heroin addicts, and it had been a long week. He was a vet and had previously told me of events during his two terms in Viet Nam--how he had lied and enlisted underage and then reenlisted after his first tour was over, because he was unable to deal with his return to civilian life. He shared how, in Viet Nam, he would sneak away and go to a local brothel, not for the girls, but because the woman in charge reminded him of his mother and treated him like a son. He still knew the words and phrases she had taught him and he had me learn them, too. He had no medals. He told me he had often won commendation, but would just as quickly turn around and do things that would earn him demotion. I was hardworking, and so was he, so I was puzzled that he would have regularly forfeited his "prizes." I had not yet connected prizes and "accomplishments" in a war zone.

Perhaps because it had been a very long day, or perhaps because all of the prior stories had set the stage, that night he began to share his experiences as a helicopter door gunner. I was young and I was naive and, before I knew it, his eyes were wide and his breathing quick and there was the feeling that we were in the door of the helicopter, side by side. The women gathered below, like his mother away from home, and their children, were numerous and close--he could see each one's face, looking up at him--as he did the job that was expected of him, drilled into him, as an American helicopter door gunner, in Viet Nam. He could barely articulate what he had just done and he was incoherent about what he was seeing, but the movement of his eyes, his posture and his imaginary weapon told the story, as did the shock and bewilderment in his eyes.

Later, he gave me his camos. I still have his jacket. Even years later, after we lost contact but happened to run into each other in another city on a couple of occasions, he refused to take it back, insisting I was the best person for it. I am just a little bit taller than petite, but it is too small for me, maybe a boy's size 16, not much larger. After a dozen moves and a million things lost, I still have it.

I hear my friend, again, as I listen to this soldier narrate this video we were never meant to see--he was there that day in Iraq, in the aftermath. We haven't learned much, because we don't admit where we've been or what we've done. We offshore the pain and suffering of our wars and try "not to look." It's not healthy. We owe it to them to sit alongside, and look. Ceramic Buttons: Porcelain
Originally uploaded by la_v_i_k_a
These choices, made by one of the women who collects my buttons, made a fabulous set! The textures and depth of the colors in my two most recent kiln-loads have been a visual banquet.

Already in their new home. I thought it would be around longer, but it was barely listed before someone claimed it!

A design I created for other work, then turned into a stamp for ceramic. Metallic gold to copper with subtle, iridescent blue to violet wings.

Posted by Victoria Cochran at 12:29 PM No comments: So, last night's firing ran late. It included quite a bit of anticipation, after the last load, which had some unanticipated results.

I have not yet opened the lower shelves to see how the reds performed (they and the pinks had a cool tinge last time, very unattractive!).

However, I'm very pleased with the tenmoku items you see here, especially this one: Posted by Victoria Cochran at 10:35 AM No comments:

As a mom and an artist, I'm pulled in so many different directions, I don't always get a long stretch of time to muddle or to spruce up webpages...or studio space...or bookshelves... (you get it). As a result, holidays--especially the ones where The Teenager gets on a train and goes to visit her sister 150 miles away--are invariably days of intense work for me. I stay up too late, eat too irregularly, but I get a lot done.

In 2005, I threw up a quick tutorial on how to make sterling earwires, using a pair of pliers and an ink pen. It turns out that page alone probably gets more visitors than any other, on any of my websites. I've been meaning to clean it up for a long time...it was done "down and dirty," with a view toward usefulness, definitely not beauty!

I cleaned it up a bit, today, and thought I'd share it...with the price of sterling these days, you really should DIY

Earwire Tutorial
Posted by Victoria Cochran at 12:43 PM No comments: Dandylion
Originally uploaded by la_v_i_k_a
One of several recently gone out the door.

Ever a fan of dandelions, I especially like this button, with its near watercolor background.
Posted by Victoria Cochran at 5:48 PM No comments: